PRICE: Hardcover $55.17 Cdn. Kindle $39.99 Cdn. on Amazon.ca. There is also a faux leather soft cover edition but as of the time I’m writing this I could not find a price.

The Study Quran is a beautiful and thorough creation marrying the text of the Quran translated into English with a commitment to remain as close to the original Arabic meaning as possible and an exceptional deep commentary that seeks no extremes but rather a focus on longstanding Islamic tradition.

The Study Quran is a quality book that is simple to use and will provide much needed context and background to any reader be they laypeople, clergy, Muslim or non-Muslim.

In an age where misunderstanding between beliefs and cultures has fed violence, suffering and extremism The Study Quran is a welcome addition not just to the Islamic lexicon but to world literature.

Intro: When Harper One announced the publication of The Study Quran I knew immediately I needed to review a copy.

The Quran and Islam have been thrust to the forefront of Western dialogue and discourse ever since the events of 9/11 and of course were already pressing into our experience before this.

Unfortunately due to the horrific nature of the event the Quran, Islam and Muslim culture have taken on certain strong, stereotypical themes and connotations that have done great harm to people both Muslim and non-Muslim all over the world.

With this context in mind I recognized the critical nature of, and important timing related to this new English language edition of the Quran.

To know a people (or person) best one should attempt to know what they believe (or do not believe for that matter). To that end my review is first and foremost an attempt to better understand Islam within my Western context.

Full disclosure: As a former evangelical Christian pastor I come at this work with a particular filter or lens. I also bring to it a certain educational experience having completed a three-year Master of Divinity in Pastoral Studies at Tyndale Seminary along with a four year Bachelor of Arts degree in English at Carleton University, a two year Journalism Diploma at Algonquin College and a Bachelor of Business Administration equivalency through Josef Silny & Assoc..

I am saying this because you need to know what I am bringing to the table as I review this edition. Despite the apparent variety I have been, and continue to be, a student of the word and a student of words.

I bring a bias of experience, as we all do. Born and raised in an Irish-Italian Catholic home. Baptized and Confirmed as Catholic I bring a bias. Moving from Catholicism through Atheism to evangelical Christianity I bring a bias. Floating now in the untethered place of post-church Christian I bring a bias and it is important for you to know these biases as you read this review.

Context: One of the most frustrating things I encountered as a pastor, as a student of literature and as a journalist is the constant, unrelenting pressure of proof-texting, which, according to Wikipedia’s good definition is:

“the practice of using isolated, out-of-context quotations from a document to establish a proposition in eisegesis.”

(By eisegesis it is meant the act of inserting one’s own ideas/concepts into the text rather than exegesis which is the act of determining meaning from the text).

Proof-texting is everywhere – journalists do it all the time with quotes, scholars and students of literature do it all the time with created works, Christians and various other students and scholars of Christianity practically make it a profession out of doing it with the Bible and so it comes as no surprise that it happens quite often with the Quran too by both Muslims and non-Muslims.

In regards to translation there is a tradition within Islam that regards the Quran in the original Arabic as the most authentic and reliable text. That is to go so far as to say the only inspired version – all others are not as legitimate. This can certainly assist with number three but it does nothing to help numbers one and two.

The Study Quran: The edition itself

This is not a review of the content and meaning of the Quran. Firstly because I do not have the experience with Islam to create such a review and secondly, as a sacred text, I stand as an outsider and bring little to no context other than as a curious tourist.

Those familiar with study editions of the Bible will found The Study Quran’s structure, binding and makeup fairly familiar. The entire text adds up to 1,988 onion skin style pages plus helpful maps at the back. There is also the familiar bookmark ribbon running down the middle in beautiful deep blue.

There is a nice heft to the book which has a beautiful cover featuring a a gold-look gilt Islamic design border and a blue and gold-gilt design in the centre. If you take off the paper cover you find a nice dark blue hard cover with the gilt-gold design again.

Open the cover and you find a typical Table of Contents, editorial information, Abbreviations, an Arabic Transliteration and Pronunciation table, followed by a General Introduction.

The General Introduction is further broken into subsections including The Message of the Quran; Language, Structure and Recitation; Role and Function in Islamic Life; The Study Quran; How to Read; Stylistic and Technical Points, Design and a Final Prayer.

Following these sections you find a small essay on approaching the Study Quran which talks about different ways of reading like reading the text alone; reading the text along with commentary, etc. There is also a small section on Understanding the Citations and a Commentator Key before one gets to the Quran proper. 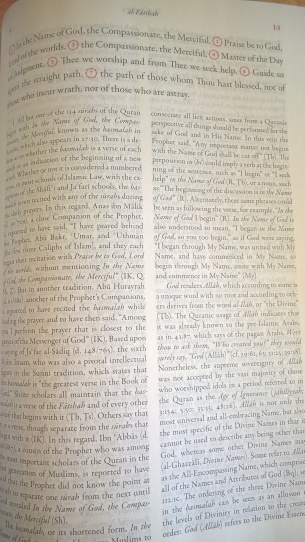 notable difference between the Study Quran and a typical Study Bible is the amount of commentary. The introduction to the surahs (chapters or books for those not familiar with the Quran) are enormous to say the least. The first surah, The Opening or al-Fatihah as it is known in Arabic is only seven verses long but subject to six and a half pages of small font, two column, verse-by-verse commentary.

To say The Study Quran is thorough in terms of commentary and additional material would be an understatement.

Of course the voluminous nature of the commentary highlights the purpose of The Study Quran, which was almost a decade in the making – to provide a studious resource for both English or Arabic speakers either Muslim or non-Muslim; to be valuable to those who are doing deep study or for those with a more casual approach.

Contributors: The editor-in-chief of the work is Seyyed Hossein Nasr, university professor of Islamic Studies at George Washington University. Nasr. put together an editorial board made entirely of Muslim Islamic scholars of great repute who not only contributed to the commentary but also to the translation into English. That is to say the effort was led by those who were both scholars of significance and believers in the Quran as “the Word of God”.

Beyond the text of the Quran proper there is a section of no less than 18 essays on a wide variety of related subjects designed to assist and inform the reader including: How to Read the Quran, Scientific Commentary in the Quran, The Quran as a Source of Islamic Law, The Quran and Islamic Art, and Quranic Ethics, Human Rights and Society.

Liberal or Conservative? To do justice to such a question would require a much deeper knowledge of Islam and the Quran than I have or am prepared to delve into at this point. Suffice to say that the editors state the goal was to create a work that was “expressing traditional Islamic views and therefore excluding modernistic or fundamentalist interpretations that have appeared in parts of the Islamic world during the past two centuries….a text that reflects how Muslims have understood the Quran during their long history and how those Muslims who remain traditional, which means most of them, do so today.” 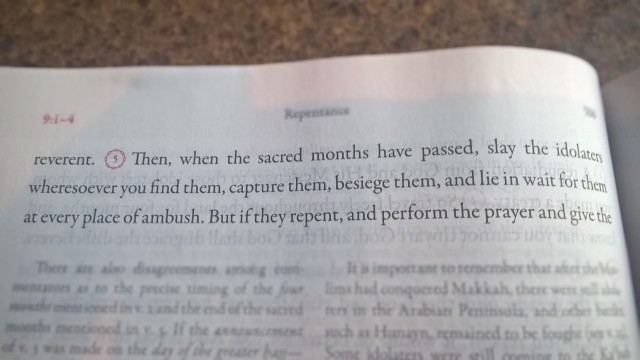 When I look at and review works of faith I like to go straight for the controversial verses to see how they are dealt with as this is often typical of the whole.

The fifth verse of the ninth surah is often referred to as the sword verse and its interpretation has caused no shortage of problems for Islam in the modern world – especially post 9/11.

It reads “Then, when the sacred months have passed, slay the idolaters whersoever you find them, capture them, besiege them, and lie in wait for them at every place of ambush.”

The verse has been accused of inciting violence against non-Muslims and as fuel for the fire of extremist Muslim terrorism.

Without re-writing the entirety of the commentary on verse five I will summarize. The commentary does a good job rooting the verse within the political strife of Islam and its prophet Muhammad during the seventh century C.E. Within this context the commentary suggests that Muslims traditionally see this verse as referring to past formative events and not as a broad rule for how to treat non-Muslims. Additionally the commentary points out other areas of the Quran that would contradict a broad interpretation that supports violence against non-Muslims today and it does so clearly and without literary contortions.

To wit from the commentary on the verse,

This is one of the primary values of such a work for as much as it helps clarify and root controversial verses within the appropriate context for non-Muslims; it does so for Muslims as well.

In my own reading of the Bible, for instance, there are no end of verses that could be torn from their original context and used to justify horrific violence, not the least of which includes Psalm 137, verse nine which states:

“Happy is the one who seizes your infants and dashes them against the rocks.”

Horrific? Absolutely. Justification for murdering babies? Not even a little. Why? Context both literary and historical tells us this.

The Rest: The commentary is not simply the opinion of the contributors to The Study Quran but an amalgam of nearly 1,400 years of traditional commentary including Hadith or traditional reports and Tasfir or exegesis.

Appendix A is an ordered list of Hadith citations.

Appendix C is the Biographies of Commentators followed thankfully by an Index. There is nothing worse than a large and comprehensive work like The Study Quran coming without an Index. While comprehensive the index feels as if it could be more thorough.

Following the index are a series of helpful maps that help with an understanding of the historical context.

Conclusion: The Study Quran is a beautiful and thorough creation marrying the text of the Quran translated into English with a commitment to remain as close to the original Arabic meaning as possible and an exceptional deep commentary that seeks no extremes but rather a focus on longstanding Islamic tradition.

The Study Quran is a quality book that is simple to use and will provide much needed context and background to any reader be they laypeople, clergy, Muslim or non-Muslim.

In an age where misunderstanding between beliefs and cultures has fed violence, suffering and extremism The Study Quran is a welcome addition not just to the Islamic lexicon but to world literature.

This site uses Akismet to reduce spam. Learn how your comment data is processed.